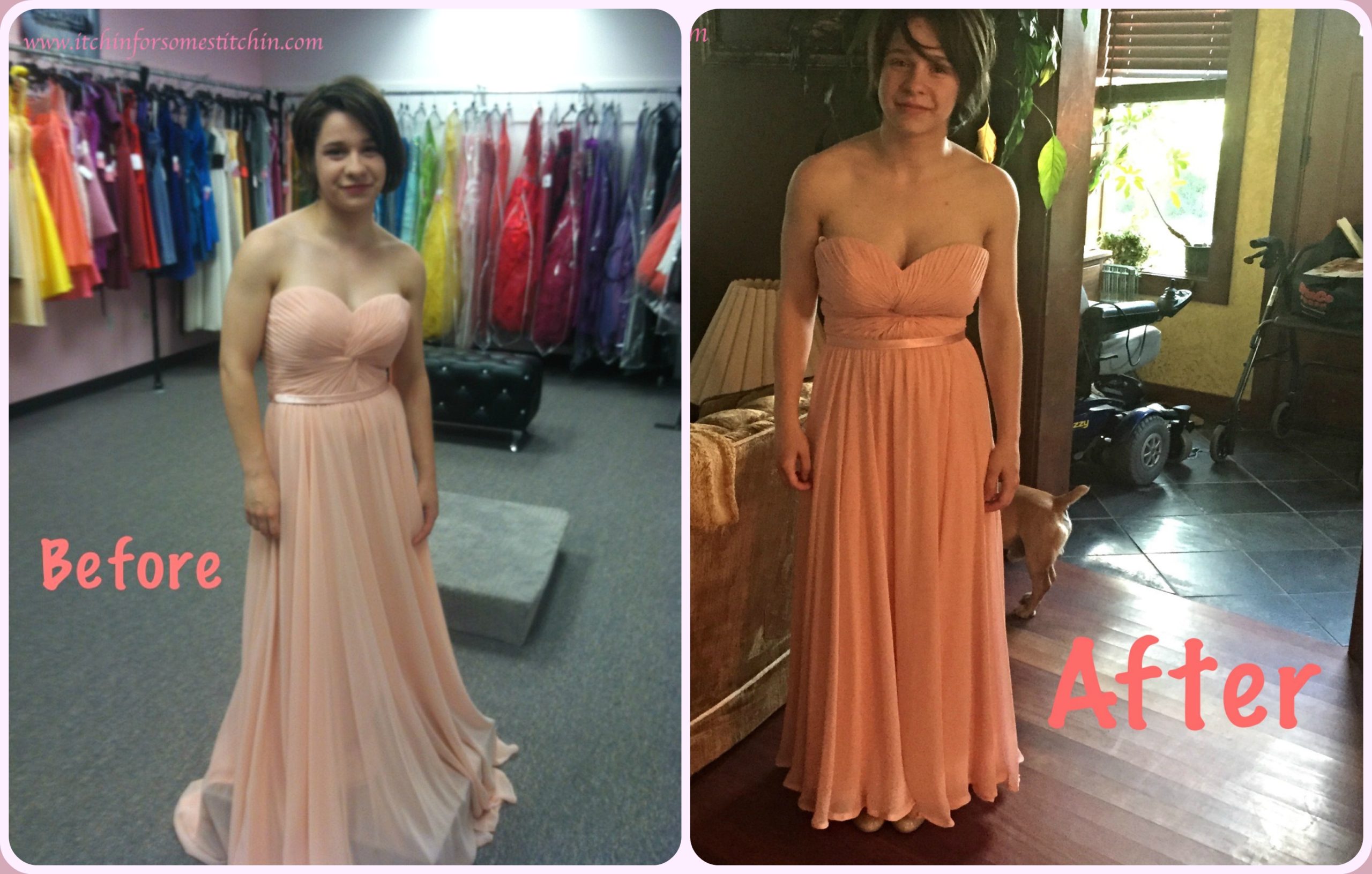 How to Hem a Bridesmaid Dress

Let me tell you right off that this article on How to Hem a Bridesmaid Dress is not the original one.

I originally made this post in 2015 and it was one of my first blog posts ever.  Three years later, I realized just how awful it was.  LOL.

So, I am taking the time to give it a little update.  🙂

However, you must know that all the photos are the original photos from 2015 as this dress no longer exists and, of course, has already been hemmed so I cannot repeat it.

Thus, please bear in mind that these pictures are from before I understood the value of good lighting and good photography.  The tutorial itself, however, is still sound and valuable. NOTE:  The color of the dress is blush, but does seem darker in some photos due to lighting differences.  I promise every picture is in fact of the same dress.

So hopefully, you’ll continue to follow along and learn something new despite the poor photography!

Check Out These Other Tutorials I LOVE!

My Other Sewing Resources

This is a  tutorial I made in 2015 because I had to hem a bridesmaid dress pronto and wanted to share with others how a sewing beginner (at the time) could do this.

My step-daughter, Alex, was getting married and all her sisters were bridesmaids.

Unfortunately,  one of her sister’s bridesmaid dress was almost a foot too long!   This is because the sister in question, Dakota, is uh… I’ll say “vertically challenged”.  She stands only 4’91/2″ tall.

Now, I am not a professional seamstress.  I am an experienced sewer, but that’s not the same thing.  And three years ago, I was a sewing beginner who only had one week to hem this dress!

This dress had three layers.  The bottom or inner layer was made of satin and the two outer layers were made of sheer polyester.

If you are hemming a bridesmaid dress with only one layer or layered similar to this, then this tutorial should work quite well for you.

I needed to take nearly 9-1/2 inches off the inner layer, so the first thing I did was measure. Using a fabric pen, I marked the bottom edge and the sides of the inner layer where I wanted to make the cut.  The marks fade and ultimately disappear from 30-minutes to several hours, depending on the type of fabric. I used a large ruler to draw a line from each marked edge all the way across the fabric. I used a ruler and a rotary blade to slice along the marked line.

The top or outer layer was sheer polyester and there was a TON of it.  I found the easiest thing to do was to lay the front part of the outer layer over the newly cut satin layer and repeat steps 3-4.  I cut the sheer layer about 3-inches longer than the satin layer. Here is the dress after all three layers, the inner satin, and the two outer sheer polyester layers, have been completely cut. It’s lookin’ good, right? But, of course, it’s not finished.  The newly cut edges had to be sewn so they would not fray.

I double folded the edges of the dress.  All the way around, both the satin and the sheer polyester layers.  I started with the satin layer, but only took pictures of the sheer layer.  The process was exactly the same.

As I folded, I pinned the folds down with straight pins.

I used a zig-zag stitch on both the satin and polyester layers to keep the edges from fraying.  Since I was on a time crunch, I wasn’t able to run to the store to get matching thread so I decided to use clear nylon thread instead.  It worked out just fine.

The dress is complete!  It took three hours just to fold and pin the sheer polyester layer and an entire day to finish the project.

You can see that the hemmed edge is not perfect, but also not bad for my second sewing project ever.

I wanted to correct my errors, but Dakota steadfastly told me, “No way.  You’re done.  They give the dress character.” LOL.

What she lacks in height, Dakota makes up for in attitude!

Until next time…  Happy sewing!

How to Crochet the Lacy Shell Stitch

I'm a full time homemaker who loves to crochet, knit, quilt, and sew. I have the best fiancé in the world, four beautiful step-daughters-to-be, an amazing new little baby boy, and six wonderful dogs, who love to keep me on my toes. Life is sweet!

Another WIP pic of one of my Countdown to Christma

This is dad with his precious fur baby Lil’ Miss

© 2020 Frejya - Designed & Developed by Sparrow & Snow
We use cookies to ensure that we give you the best experience on our website. If you continue to use this site we will assume that you are happy with it.OkNoRead more